With over 28,000 nominations Natasha made the shortlist of 8 people for the Positive Role Model for Race, Faith and Religion! Winners will be announced at the ceremony on 20th Sept 2019!! #NDA19: To read more about the National Diversity Awards visit: nationaldiversityawards.co.uk 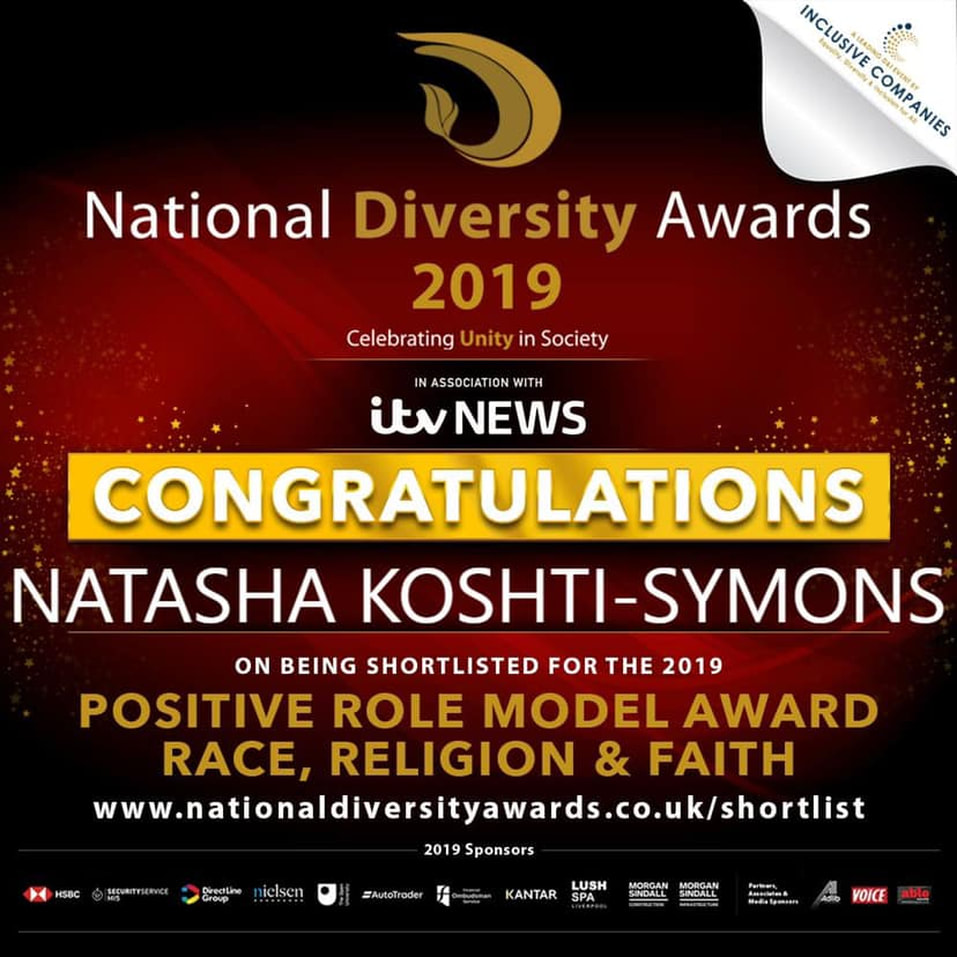 ​National Diversity Award profile:
Natasha Koshti-Symons | Plymouth, UK
​
Positive Role Model (Race, Faith & Religion)I have always been involved in raising money for charity, since I was a child I took part in a local dance school that regularly raised money for charity. At the age of 15 I attended Bollywood and khatak dancing and within a few months the teacher left and I was asked to take over, I grew and developed the dance school (Natasha’s Bollywood dance school) and over the years have raised thousands for charity. In 2016 and 2017 I put on a family and friends and evening which both years raised over £2000 for different charities. The dance school is inclusive to a range of ages, race and abilities, and I am to bring together all communities through the medium of dance, building confidence self-esteem and knowledge of a different culture. My dance school regularly gets asked to be the entertainment for charity events and local events such as Lord Mayors day, illuminate (Plymouth mayflower), Derriford hospital, schools, theatre Royle and so on. I feel not only is this a great opportunity for my students to get involved in charity work and performing but also for our audience to become more familiar with different cultures. Just last year we were the only entertainment for a Bollywood themed charity dinner which ended up raising £36,000 for charity.

I won Miss Inspiration UK 2016 and Miss Royle Charity UK 2017 and co-run our own Miss Sweetheart UK in 2017 raising over £2500 from that one event for charity. One of my Bollywood students went on to win Miss Teen Charity Inspiration UK.

As the teacher I also go into schools in my spare time running Bollywood and cultural workshops, I work with all ages from preschool to secondary creating a safe environment to ask questions and have interactive sessions about Asian culture, I have been astonished by some young people’s interest and questions they have asked me at such young ages, I believe a lot of racism can be ignorance and lack of understanding so I like children and young adults to feel they can ask me anything and I will do my best to answer, I have travelled a lot having spent months in India training with Saroj Khan Bollywood dance teacher, time in China and Sri Lanka and Thailand which I will go into more detail later, but I use my experiences of living with families abroad and my mixed heritage to bring back to the UK and relate to people in a way they can understand and give them a positive attitude to different cultures. I have also ran workshops for special educational needs in a sensory manor so appropriate for my group.

Living in Plymouth, the city is not as diverse as others in the country, I was lucky enough to help organise Plymouth’s first and second Mela, alongside this I had my dance school perform and co-choreographed with a bharatanatyam teacher flash mob mass performance in which we involved all dance schools of all forms of dance to learn and perform the piece.

In 2015 I took part in dance dance dance as a ballet dancer, however the following year I co-coordinated with the original organiser and then took over the organisation for the dance show. This show was a sell out every year and raised thousands for charity. It was an inclusive show with representing dancers and dance forms from all over the world integrating culture through dance music and costume.

I have grown my understanding of culture through my work and experiences abroad, my first experiences attending a high school and living with a family in Thailand at 14. I represented Plymouth University studying Chinese culture in Shanghai living in student accommodation in the university grounds. Between my degree and my masters in clinical/ clinical neuropsychology I went voluntary to Sri Lanka as co-ordinator of volunteers, living in a village with a family to work, educate and learn about mental health. Completing daily projects in the hospitals and orphanages. However my most proud memory was working in a school for disabilities a young boy never spoke and by the end of my visit and working with him he was attempting to sing with us. And a young women with no legs wanted to dance so I taught her a dance with her upper body and she entered into a competition. I learnt so much about their religion and culture alongside educating them on my own. After completing therapy workshops with a Buddhist monk, I completed my masters dissertation on the cultural differences in the effective treatment of trauma cross cultural looking at Buddhism and mindfulness and how we need to be mindful of culture when treating mental health in the UK.

During my time in University I supported many religious and cultural groups, alongside being an organiser of ESN (Eurasmus Exhange Network) this included arranging events to educate them on British heritage and celebrating all different types of religious and cultural events, plus being a safe environment for support.

I have done all this in my spare time while working and studying and recently becoming a mother.
Powered by